OK I've finally finished the "seventh" set of nine crazy patched blocks in this "Build a Seam" RR and ready to show off the beauty of these "just about finished" blocks.

Anything Goes  -  This baby is pretty full so I added to the Venice Lace flower patch some feather stitched filler stems and French knots in Perle Cotton 12 – A Leaf Falls. 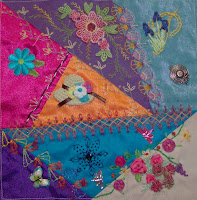 Buttonhole  -  This one was also kind of full so I used the Buttonhole stitch for the shape of the pineapple and filled it with straight stitch to form diamonds in Valdani #12, stem stitch for the leaves in Wildfowers #252 Prairie Grass and Cretan for the grass base in Simply Wool #0440W Maple Syrup. 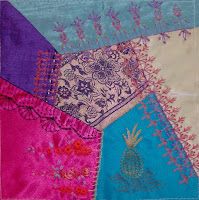 Chevron  -  There were no open seams so I did a circle medallion in chevron stitch, filled in the centre with straight stitches and anchored in centre in Crescent Colours #013 Finley Gold.  Joined the outer edge with fly stitch and detached chains.  Then on an existing button seam treatment I added detached chains in the same gold as the medallion. 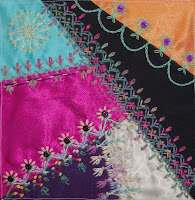 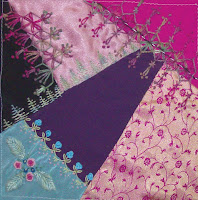 Detached Chain  -  Using DMC gold rayon detached chains lying down alternating positions and then with DMC green rayon stitched in between in herringbone.  In the orange patch stitched a detached medallion in DMC #4240. 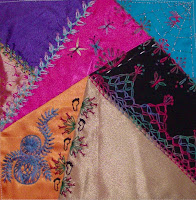 Feather  -  This time I left the one seam untouched and in the gold patch stitched my first not bad feather stitched heart in 2 strands of Sampler Threads Gentle Art #0311 Holly Berry with 1 strand of DMC silk S3685 for accent with blue seed beads. 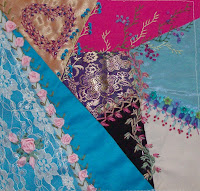 Herringbone  -  On the purple/orange seam in Needle Necessities #1781 floss an uneven wavy herringbone seam anchoring crossovers with bars.  Then on the purple in DMC 740 orange and on the orange in Anchor #0101 purple added detached chains and French knots.  In the orange patch I stitched a wasp/bee in dark brown and gold DMC – padded satin stitched head, Colonial knots for upper body, blanket stitched body, stem & fly stitched wings and chain stitched legs.  Finished off with outline flight trail. 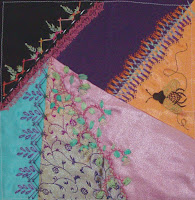 Outline (Stem)  -  Along the gold patch seam in DMC #4045 stitched an entertwined stem and branches with detached chain leaves and added seed beads for berries.  Then on either side of the butterfly patch added stem and detached chain designs in DMC #4240. 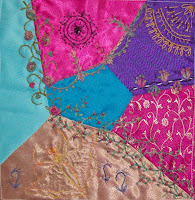 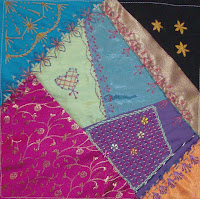 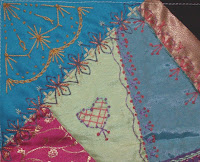 Now onto the "LAST SET" of nine blocks for Diane (received last week) and then I'll finally be all caught up and completed for this BAS RR - it's been a long haul and fraught with many setbacks - a fair share of my own.  Hopefully I can get them planned out this week and buckle down to stitching so they hopefully can be on their way home mid-April!!!

Needless to say I'm anxious to get my blocks home and see the beautiful work done by all the girls - I know pictures do not tell the WHOLE story of how exquisite the stitching embellishing is!  I still have intentions of making mine into a table top fabric book - I just hope I can pull it all together!!!
Posted by Rose Anne B at 11:27 p.m. 2 comments:

Yes we thoroughly enjoy our get togethers of the ex-employees of the Bay Lewiscraft.  Sometimes it's just eating and gabbing and sometimes it's "craft night" and lately they are being hosted by and up and coping young crafter - Georgina/Pat's granddaughter!

This time it was a Valentine's Day theme and we all drew names and then made special cards for our friend.  Here I'm holding the envelope and card that I made for Georgina who is also a quilter.  So I kinda tried to make it look quilt-like - not sure if I succeeded as I have MAJOR problems with the corner and trim cutters - they just did not line up and had to try again.

﻿ So again thank you Maykela (hope I spelt that correctly) for all your ideas, help and laughter!!!
Posted by Rose Anne B at 1:07 p.m. 1 comment:

Gosh lots has happened since my lapse in blogging and now it's catch up time!

We had a spring "potholder" swap within our small SewBuds group and I totally had fun doing mine of selvedges at the February quilt retreat.  The worst part was trying to do the hanging loopy all in one process in binding them - just was not possible for me so cut a piece and tacked it in place and then bound all around.

Basically I prepared a shorter top fabric of selvedges and then a still shorter piece which I stitched onto some heavy weight cotton as I wanted pocket-like holders so ones hands are kinda protected from oven burns.  I used an iron board type of quilted batting (supposed to be heat resistant) along with the silver heat resistant fabric and over quilted the two together.  Then I sandwiched the three pieces and bound them together.

I think they turned out pretty good and I even was asked to make another set for a co-worker but for her smaller hands with a "thumb" placement stitched in.  So that'll be my next project after I finish off a couple of other things first.
Posted by Rose Anne B at 12:43 p.m. 1 comment:

OK I finally finished off Joyce’s nine BAS RR blocks mid-February but there was so much going on with house/dogs sitting and then fracturing a large chip on my left big toe that I just did not get around to blogging.  Yes I needed help walking the dogs but the rest I managed except for needing help to move me back home and I’m still hobbling around in a large boot cast and on crutches especially outside.  I've gone in for a followup and can start some ankle movements and now have physio on that foot/ankle to get movement back into the joint!

As for Joyce’s blocks here are pics of what I’ve added to previous member’s embellishments on these blocks - she asked for my cretan trees and I've also added in a cretan stitched jelly fish:

Between trio of detached chains I added blanket stitched designs in ice blue or grey rayon.

Now I'm working on Pam’s set of blocks and I got word that my blocks are at the last member and when finished will be coming home – WOW!!!
Posted by Rose Anne B at 12:35 p.m. 4 comments:

OK I’s not a happy camper, but then last night when I had my foot bare and up on pillows I realized I had like zippo movement in my other 4 toes on that foot, could move my ankle but rusty like – LOL!  And when it’s not in the boot cast the big toe feels like needles are in the end/tip under the nail.

So this morning the Dr checked it out and said basically it’ll take 6-8 weeks for that toe to heal period, and movement will start to come back with some physio help but not for at least 2 weeks yet (am making the appt today for then).  I’m still in this boot cast for 3-4 weeks and if physio is going good then I can change to hard soled shoes.  BUT I’m still on both crutches for outside for a week at least and then maybe down to one crutch and if my balance is good then just walking with the boot cast or shoe.

If for some reason it is not responding to physio or it still hurts in a week or two then I’m to come back again.  Otherwise he does not think there’s any muscle/ligament damage upwards nor will I lose my toenail as there is no blood accumulation at the base or discolouring, just the bruising that is fading.  That better be true!!!

So guess Murphy and I will be cuddling on the couch a lot this next week for sure (my next house/cat sitting starts on Sat).
Posted by Rose Anne B at 7:49 p.m. 1 comment:

Rose Anne B
I can’t seem to get enough of crazy patch and embellishing and fabric postcards. And now it’s gone a step further and I LOVE quilting retreats!